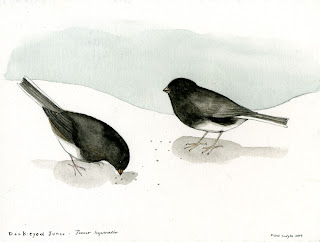 I recently prepared a specimen of a Dark-eyed junco. I love juncos, or "snowbirds" as they are still commonly known. I had a group of these little guys frequenting my feeder this winter, always gathered at the base of it foraging for the fallen seeds. They have a distinctive slate grey hood, upper body, wings and tail with a bright white chest and outer tail feathers.

Juncos are extremely common birds, with numbers around 630 million, and a range that covers northern Alaska down to northern parts of Mexico. Because of this broad range there is quite a bit of plumage and bill color variation from population to population depending on its geographic location. This has resulted in a somewhat confusing taxonomic history, with the currently named Dark-eyed junco being classified into 5 distinct species up until the 1970s. The current classification lumps the 5 into Junco hyemalis (Dark-eyed) but still acknowledges the 5 subspecies by retaining the scientific and vernacular name each from this older classification. Taxonomy is something I know little about, but am really fascinated by especially now with all the recent developments in genetics. A lot of reclassifying is happening and is going to happen for many species of bird and mammal.
Email Post