The Story of Cher Ami 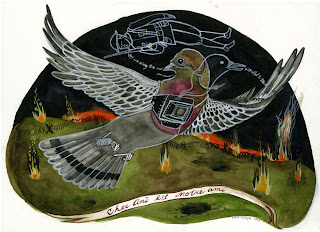 Ever since I read a book on pigeons last year, I have been fascinated by the use of homing pigeons during the World Wars. One of the most famous of these homing pigeons was Cher Ami. Cher Ami, helped to save the Lost Battalion of the 77th Division. In the battle of the Argonne in October, 1918, 500 U.S soldiers were trapped in a depression behind a hill, and surrounded by German troops. Lacking ammunition and food, they were also suffering friendly fire from allied troops that didn't know their whereabouts. After just 2 days, only 200 of the original 500 remained.

The battalion released homing pigeons with messages asking for help. The first two pigeons were shot down. The last remaining pigeon was Cher Ami. Cher Ami was released with a tiny cannister attached to his leg, containing the message: We are along the road parallel to 276.4. Our own artillery is dropping a barrage directly on us. For heaven's sake, stop it! Cher Ami was dispatched and flew through a shower of German bullets. The battalion witnessed him being shot down, and then shortly thereafter rise again. Cher Ami flew 25 miles in 25 minutes, arriving at his loft with a blind eye, severe gunshot wound through the breast, and a leg hanging by a single tendon. Poor Cher Ami! The message cannister was still intact, revealing the battalion's location, and 194 lives were saved. Great effort went in to restoring Cher Ami to health. Even a little wooden leg was carved for him, to replace the one that was destroyed. He was awarded the Croix de Guerre Medal with a palm Oak Leaf Cluster for his heroic service, and died from his battle wounds on June 13, 1919.

This is a watercolor I just completed for our Dear Friend. For a little more pigeon love and lore, check out Andrew Blechman's book "Pigeons:The Fascinating Saga of the World's Most Revered and Reviled Bird". Here's his New York Time's article.
Email Post