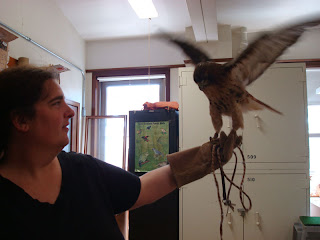 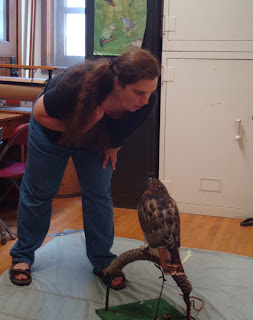 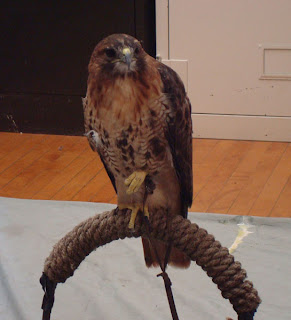 Last Thursday, a rather large tour group was coming to view the Bird Division. The group was so large that I, along with another volunteer was asked to help. I was given the task of talking about the prep lab and then taking smaller groups into the dermestid beetle room. This may seem a dubious honor to some, but I have come to really appreciate the little guys, and their thankless work. I will admit that there may be a veeeery teeny tiny part of me that enjoys bringing a well polished group of nice suburbanites into a room full of carnage. Although I have sung their praises on this blog before, if you are not familiar, dermestids are colonies of carrion eating beetles (nothing live holds any interest, just the dead stuff). Museums often use them as they are the most natural, chemical free, and thorough method for cleaning skeletons.

Also part of the tour was Denver the Red-tailed Hawk. Denver's human is Mary Hennen. Mary has been working in the Bird Division for roughly 12 years. In addition, she has been a major part of Peregrine Falcon conservation in the Chicago area. Peregrines had disappeared from the area by the 1960's due to DDT use, but thanks to the ongoing efforts of experienced biologists like Mary and other dedicated volunteers they have been successfully reintroduced to the Midwest, and are carefully monitored. So, a little bit about Denver. Denver is what is known as an imprint bird. Imprints are birds that were exposed to humans at an early stage in their development, and as a result see humans as their own kind. This is why in many avian conservation programs that involve captive breeding (California Condors, Whooping Cranes), young birds are reared using either hand puppets, or in the case of Whooping Cranes, by humans in full body "crane" suits. An imprint such as Denver cannot survive in the wild, since he does not know how to hunt properly and he will not recognize other hawks as potential mates. He now lives with Mary. This is a huge commitment on her part as he can live up to 30 years (he's currently 18), and she has had to construct a proper outdoor living facility for him. There is also the matter of the frozen quail that must be shipped in on dry ice for his food. There are permits and legal issues regarding the keeping of a wild animal, and part of keeping Denver is that Mary must use him for educational purposes. Tours groups and taking him around to schools are the perfect opportunity to fulfill this obligation.

Denver arrived in a pet carrier that had all of the windows blocked out with tape. Keeping him from too much stimuli aides in keeping him calm and relaxed. She blocked out an area near the lab with tables so that people would not be able to get too close to him, or walk around behind as he doesn't like people standing in his blind spot. He was placed on his perch, and to my amazement, he remained quite calm despite the steady stream of human gawking. Mary is the only one he will let handle him. She also mentioned that she is "courted' by Denver once a year. I am not sure what this involves exactly, but she did say that one thing he likes to do is preen her shoe laces. What a guy! He was molting a bit, as you may be able to see in the photo. If you look at his tail feathers closely you can see that some are shorter than others. The shorter are the new feathers coming in. I sat and sketched Denver for bit. He obliged by being his perfectly handsome, well behaved self. In one of the photos above, Mary is actually blowing on Denver. She would give a quick puff, and he seemed to like it as he ruffled out his feathers.
Email Post