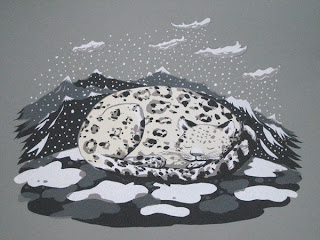 Ever since reading Peter Matthiessen's The Snow Leopard, I have been drawn to these most enigmatic of mammals. They are so mysterious, and elegant, it seems an obvious sentiment. Who wouldn't be drawn to these gorgeous, almost mythic cats? Very few people have been fortunate enough to view them in their native high, Himalayan habitat. Matthiessen's book was written in 1973, and relates a trip to Dolpo he took with the great zoologist George Schaller. Schaller was going to the Tibetan plateau to observe the bharal or Himalayan blue sheep, and in addition, hopefully glimpse the elusive feline that preyed on the bharal. The book beautifully documents the culture and natural history of the area, as well of the inner journey of Matthiessen, a Zen Buddhist. At the time Schaller was one of two Westerners to have seen Uncia uncia in the wild since 1950.

Since then, the leopard continues to live up to its secretive reputation, as well as dwindling in number. How much so is difficult to say. Getting a head count on an elusive creature that favors dangerous, rugged, and often inaccessible terrain must involve a good amount of guess work. In the Planet Earth series, there was footage of a leopard hunting, and no doubt was the result of many months of agonizing patience, if not more. The last issue of National Geographic had a feature on Snow Leopards. The photographer had set up various cameras that would be triggered by cats slinking through their territories. The resulting photographs were on par with finding visual evidence of the yeti. Camera flashes illuminated mountain spirits haunting craggy cliffs. Their tails are so large and fluffy, that in addition to serving as a counter balance to aid in navigating steep terrain, it can be wrapped around its sleeping owner to protect from chilly weather. I felt it time to make a Snow Leopard screen-print.I haven't finished signing the edition yet, but the print should be available in the Etsy shop in the next day or two. A portion of the sales from this print will go to benefit a wildlife organization, but I haven't settled on which one yet. It will be specified in the Etsy posting.
Email Post