Not a Bluebird of Happiness 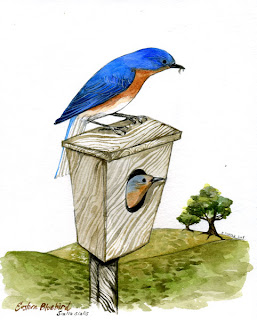 Well, today I got an unfortunate example of nature red in tooth and claw, and the effects of an aggressive, invasive species. The painting above was done as a commission. The person that commissioned the piece from me, did so as a gift to his parents. His parents had put out a bluebird nesting box on their property. Bluebird populations had been dwindling for sometime, but this year they were delighted to discover a nest in their box, and it's dedicated parents. That's when this painting was commissioned. I had just shipped off the painting today, when I got an email stating that his parents had noted some House Sparrows trying to get into the nest. They seemed to be successfully staved off for awhile by the bluebirds, but alas, to no avail. They had been out of town, and when they returned, they checked the nest box to find the bluebird chicks pecked to death inside. I had heard of this kind of House Sparrow behavior before, but never quite believed it until now. It's hard not to anthropomorphize such behavior sometimes. I once heard Julie Zickefoose in an NPR interview allude to some of her culling practices for House Sparrows. I was mildly apalled. Even though I know the havoc introduced species like starlings and House Sparrows can wreak on native populations, I don't have it in me to be killing the little buggers with my bare hands, or by any means, for that matter. After today, well...hmmm.
Email Post