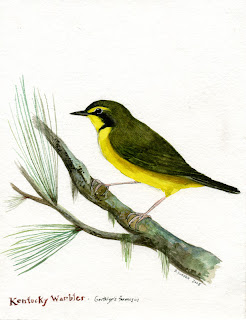 I went to the Field Museum last week and worked on about 5 different birds, one of which was an extraordinarily beautiful Kentucky Warbler. I don't think I have seen one before, and Dave said that we only had a couple come into the museum this migration season. I got the sense that in general they are not very common, but especially so around these parts. Birds of North America site states that tropical deforestation may be a key factor in the reason why numbers of this species have been declining. A ground nesting bird, they inhabit dense deciduous forests of the southeastern US. The male ( shown in the painting) has a bit more black and dark grey on its crown than the female, but both have the bright, saturated yellow breast. I was a bit confused when trying to look up the scientific name of the species to write on its label. When creating a study skin, a label is made for the specimen. The label has a number that gives some indication as to where the bird was collected, a date when it was found, sex, size of the gonads, amount of fat present, and if it is a passerine type bird then the ossification of the skull is recorded and this gives some indication as to how old the bird may be. In the Sibley guide and on Birds of North America the Kentucky is listed as Oporornis formosus, but Dave had written up a leg tag for it as Geothlypis formosus. When I asked him if it was a mistake, he said no, but I wasn't able to gather the specific reasoning behind using Geothlypis instead of Oporornis. He said Geothlypis species included the Common Yellowthroat, so maybe there is some recent DNA evidence the these birds are somewhat closely related.
Email Post