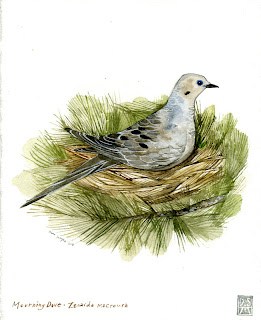 A friend of mine was taking down a hanging planter basket in his yard when something fluttered out of it suddenly, giving him quite a start. He peered down into the basket and saw a scraggly tumble of twigs with two little eggs in it. He looked up, and a ways off in the distance saw the previous occupant, a Mourning Dove. He immediately hung the basket back up, went inside the house, and called his birdie 911 - me. Paul is a robust 6' 2" -ish, he wields large power tools on a daily basis, has been known to shove malted milk shakes into the faces of those who dare insult his friends, and yet, I could hear the guilt bubbling up and threatening to crack his voice on the other end of the line. What if the dove doesn't come back?!? What do I do? What if the eggs don't hatch?!? How would I know?!? I told him to wait, and chances are, when the dove figured out all was well again, it would return. And indeed it did. Now that the panic has subsided, Paul tells me he is "creeped out" at how the bird sits so intent and motionless, even as the basket sways in the wind. Some would call that its Zen-like focus on hatching those eggs. He claims the dove stares him down out the corner of its eye. Paul's a little paranoid. Paul is reading this. Paul did some online homework on Mourning Doves and learned that it takes roughly 15 days for the eggs to hatch, and 15 more for the squabs to fledge. Doves like other species in the family Columbidae drink water by immersing their bill entirely and sucking in through the nostrils. They feed their young a rich substance called crop milk, and both male and female share in nesting duties.
Email Post