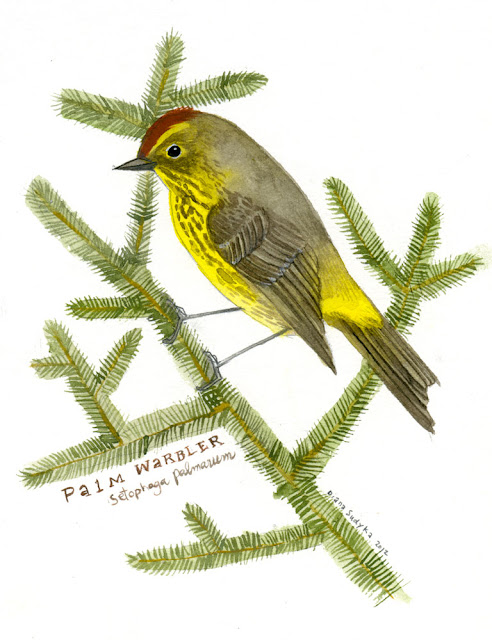 I went birding this past weekend with a friend in Hyde Park. We made our usual rounds of Wooded Isle. We came across about 30 different bird species, including these little guys.

Palm Warbler, despite what its name would suggest, is not a bird that breeds in the balmy tropics. It prefers the bogs of the far northern most reaches of the United States, and the boreal forests of Canada. What my friend and I were witnessing was a wave of them combing through the Chicago area on their way to breeding grounds up north.

They were quite conspicuous in their foraging behavior. I am sure this is in part why we were able to spot so many. I'm not the best birder. If I can see it, that means anybody can.They seemed to prefer the lower shrubs and plants over the larger trees. I just learned that they will make their nests on the surface of a bog, usually underneath a conifer tree. They are difficult to study due to the remoteness of their nests, thus little is known of their breeding behavior.

I'll be at the Field Museum tomorrow, so if you follow me on Twitter or Istagram, I'll try to post a bunch of behind the scenes photos of the bird division!