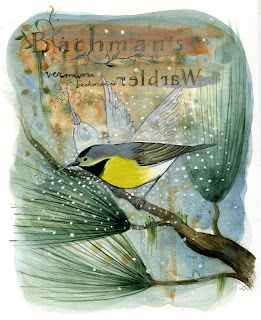 Last week I was giving a tour of the bird collections to a group of friends from out of town. Amongst the many rows of cabinets that house the collections, is a case that has been put together as sort of a show and tell. The main drawer in this case contains many different bird specimens, each chosen for a particular quality that highlights important information that can be gleaned from the collections. The drawer has a higher proportion of domestic species to foreign, and there are several specimens of extinct species such as the Passenger Pigeon, Carolina Parakeet, and the possibly extinct Ivory-billed Woodpecker. Sitting towards the front of the drawer is a tiny yellow bird, which in giving past tours I had managed to overlook. It was pointed out this time by a little girl who really wanted to know what that tiny yellow bird was. I picked it up an looked at the very old label, and saw "Vermivora bachmanii", otherwise known as Bachman's Warbler.

I had heard of Bachman's, but knew very little about it. I know enough to know that it, like the Ivory-billed Woopecker, is sort of a Holy Grail for many birders. Named after a friend of Audubon's, its first recorded sighting was in 1832, and the last confirmed sightings were near Charleston, South Carolina from 1958 to 1961. Very little is know about it, and it would seem that it was never a very numerous species. It's breeding range covered a portion of the southeastern United States, and it wintered in Cuba and possibly parts of southern Florida. Like the Ivory-billed Woodpecker, it has a history of being written off as extinct time and time again, only to resurface with some bread crumb of evidence that it is still with us. When a possible sighting of an Ivory-billed Woodpecker in 2005 turned up in some video footage, I was in Germany when the news broke. At the time, it felt like a token of forgiveness from nature, but as years pass without another confirmed sighting, it now seems more like a haunting. The last whispers of evidence for Bachman's Warbler were a handful of possible sightings in Cuba in the 80s. One can only hope that little Bachman's is still holding out in some deep corner of a southern bottomlands forest, hidden from human eyes. Last night I listened to the only recordings of a Bachman's song. It was made in 1954, and it sounded more like a buzzing trill of a cicada than that of a bird. I hoped I wasn't hearing a ghost, but really, who can say?