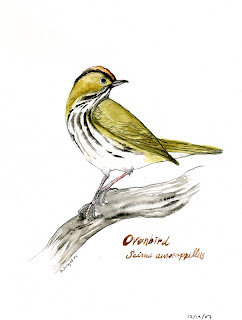 This large warbler's common name is derived from its habit of building a domed, oven-like nest of leaves and grass on the ground. It's a drab olive with some dark streaking, especially along the crown. Although it is not always easily visible, it has an orange/gold wisp of feathers lining its head. I think part of its scientific name "auracapilla" points to this characteristic. In addition to nesting on the ground it is also primarily a ground feeder. Its numbers are in decline, most likely due to the continuing fragmentation of North American forests. As with so many other species of birds, it requires large tracts of forest for successful breeding.
Email Post