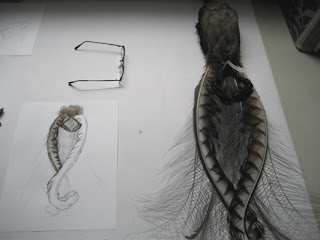 Alright, so as you can see in the photo, I began a painting working from a specimen of a Superb Lyrebird, but the painting has currently been abandoned in frustration. Grr. The study wasn't quite living up to the glory of the subject. Lyrebirds are pheasant sized birds native to Australia, and there are only two: Superb and Albert's. They are known for their extensive mimicking abilities. Male Superb Lyrebirds, in order to attract a mate, create a performance that consists of lifting up, fanning and shaking their extraordinary tail feathers over their heads while belting out free-form songs consisting of both natural, human, and industrial sounds. There is a clip I recently watched of a male shakin' it and mimicking the sound of a chainsaw (ladies love the chainsaw), and then interspersing this with its own song and those of other species of birds. I believe they are the largest bird ( along with Thick-billed Ravens) in the order of Passeriformes (song birds), and have the most muscled syrinx ( a bird's vocal organ located at the base of its trachea) of all Passerines.
Email Post