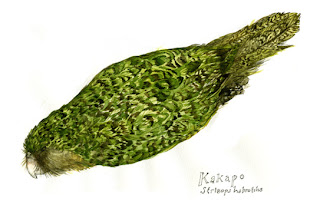 This week, I was set loose in the Field's collections and so, rather than prepare specimens, I worked from specimens of my choice to create a few studies. Several years ago my husband gave me a book by Douglas Adams titled 'Last Chance to See'. It was a small book about a number of species on the brink of extinction and the people scrambling to save them. There was a photo of a bearded, tough, and seasoned looking man holding this fat, green parrot like a baby, and in turn the parrot was gingerly holding the man's finger for comfort in its beak; I've been enchanted ever since. Kakapos are large, chicken-sized, moss green, flightless parrots native to New Zealand. They're incredibly rare with only about 60-80 left. The remaining Kakapo population was moved off of the mainland decades ago and onto offshore islands, as they were quickly going the way of the Dodo due to (amongst other factors) predators introduced by Polynesian and European settlers. They're scientific name 'Strigops habroptilus' means 'owl-like' for their heavily whiskered, disk-like ring of facial feathers, and 'Kakapo' is Maori for 'night parrot' alluding to their solitary, nocturnal habits. Aside from wobbling around being chubby and adorable, they have many distinctive behaviors. The males will occupy leks (natural staging grounds chosen by males to strut their stuff whilst the ladies swoon) that have a series of shallow divets used to amplify their low frequency booming vocalizations. If you want to hear a soundbite of the booming, or learn more in general, and how to help, check out The Kakapo Recovery
Email Post