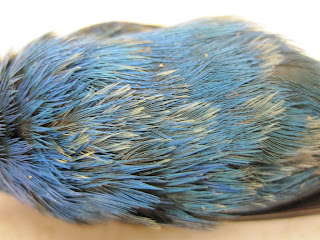 I went in to the Field Museum yesterday, after not being able to go in for a couple of weeks. It was really nice to work quietly in the lab for 5 hours, and visit with the regular crew of biologists. Dave Willard had taken out four birds from the freezer for me to work on: Blackburnian Warbler (Dendroica fusca), Canada Warbler (Dendroica wilsonia), American Redstart (Setophaga ruticilla), and a male Indigo Bunting (Passerina cyanea). I think they were all birds that had been injured from downtown building collisions, and brought in to a wildlife rehabilitation center by volunteers. Obviously, they didn't survive their injuries, hence their arrival on my table in the Field Museum prep lab. I would rather that they were alive and off collecting bits of moss to make nests somewhere up north, but I do honor the privilege to study such beautiful creatures up close. The male Indigo Bunting's electric blue plumage was particularly stunning, so I took a photo of it. Have a great weekend!
Email Post