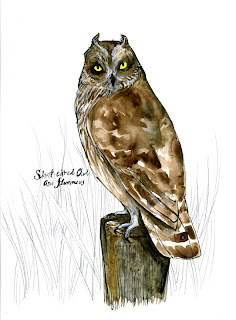 This week at the Field Museum is the annul Member's Night. For two nights in a row, the museum gets all tidied up and opens its behind the scenes doors to museum members. People can wander from one department to the next and chat with scientists. I am planning on going Thursday night with a couple of friends to heckle some of the ornithologists, and snoop around some of the the other divisions. I hope the dermestid beetles got the memo to look sharp.

Awhile back I worked on preparing a study skin of a beautiful Short-eared Owl. Dr. Willard had taken it out of the freezer and laid it out to thaw, and when I first glanced at it I thought it was a Long-eared Owl, as we were having quite a few descend upon the Chicago area at the time. I went about looking for the long ear tufts and instead, found none and was momentarily confused (it doesn't take much, I tell you). Asio flammeus is a ground nester, and prefers open habitat, such as tundra, grasslands, and marshes. Although the owl is widespread, its numbers have been declining in recent years (especially in the Northeast). Factors that contribute to decline could be increased predation, and loss of habitat from human disturbance.
Email Post